UPDATE: It is not quite the end of February and we have tragically recorded the FOURTH road fatality: http://www.royalgazette.com/article/20140227/NEWS/140229730

Rather buried in stories about the crime rate recently, was a terrible statistic.
The Police Commissioner was quoted as saying: “It’s an important point to make that in the last five years more than twice the lives lost through gun crimes were lost to fatal collisions: 24 shooting deaths as compared with 54 road traffic fatalities in the same period.” 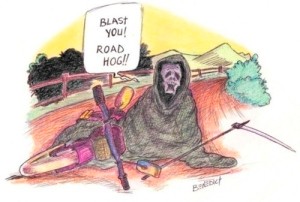 We have dedicated huge resources to solving the shootings and conquering the gang problem and rightly so. It threatened to fatally undermine Bermuda, it threatened to rip apart the social fabric.
But imagine how many more resources would have been poured into the problem had the number of gun and gang-related deaths been 54, not 24.
Imagine the outcry, the calls for action, the debates in Parliament. It would have been endless and deafening.
But listen. What do you hear. Nothing. Silence.
You hear nothing about 54 deaths on our roads in five years.
There are people out there who have worked extremely hard to bring this issue to the fore, in particular CADA, which believes policy makers lack the will to try and tackle the problem.
“More of them die from road fatalities than gang violence,” CADA executive director Anthony Santucci said. “People die and we just don’t do anything about it.”
How sadly true.
It seems to be socially acceptable to take risks on the roads, to overtake on yellow lines, on blind corners, to speed, to ignore stop signs, to tailgate, to drink and drive.
What is needed is a national campaign that says speeding on the roads is unacceptable, that bad behavior is unacceptable, that drinking and driving is unacceptable.
When we get to that point, when someone says ‘I’m not driving with you, you’ve been drinking’, then we might reach a stage where the number of roads deaths at least equals the number of gun deaths….
I think I am right in saying that at one point in the last few years, the police were planning a major TV/advertising campaign but that budgets were cut and the campaign never happened.
I would love to see it resurrected and I would love to see a campaign that was shocking in its content whether it upset people or not. It seems to me that people will not act more responsibly themselves, so they need shocking into action.
However, is there the will? Will Mr Santucci be the saying the same thing in years to come? I fear so.

3 thoughts on “An epidemic, but what are we doing about it? UPDATE”